Friday was quite a busy day for me. I dropped Brinley off at school and then headed downtown to Sacred Heart Hospital, where 3 other mother's and I spoke to around 80 NICU and L&D nurses and a few doctors about the death of our infants. We went in chronological order, the first to speak was a mom who had a baby die 40 years ago. She never got to see him or hold him. He lived for 5 days. Then my friend, Sarah, spoke about her daughter, Grace, who was stillborn at 33 weeks in 2003. She was told to not hold or touch her baby too much because she was too fragile. I was next. In the few years between Sarah's experience and my experience, a lot had changed. I am so grateful for the Forget Me Not Program. I can't imagine being told that my baby was just too fragile...If she's dead, what more harm could I do? The next mom, my friend Jodi, talked about her twin boys, one who survived, extremely healthy, the other, died of many anomalies, including Leukemia, almost a year ago at the age of 2 months.
Being able to share our stories is healing in so many ways. Especially to nurses and doctors who make such a huge impact on families, they are the ones who make your experience either better or worse. You always remember who was in the room, what they said to you and how you, your family, and the baby were treated. If I get to make one families experience a little bit better, then I've done my job.
Later in the afternoon, I headed over t Brinley's school. The first grade was doing a little presentation on Nursery Rhymes. They were told to come to school dressed as their favorite one. I had asked Brinley a week or so ago what whe wanted to be. I figured a spider would be easy enough, especially this time of year. She suggested a star... 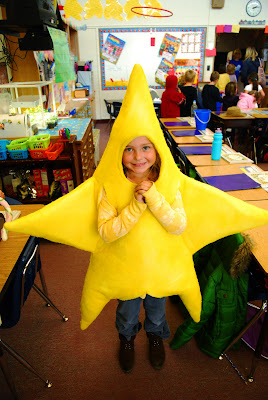 I popped her costume out one afternoon in about 10-15 minutes. Then spray painted it yellow and let it set overnight. She LOVED it...so did all the other kids at school who chased after her and poked at it during at the last recess, the only recess she was allowed to wear it out to.
It was a hit. Can you spot her?... 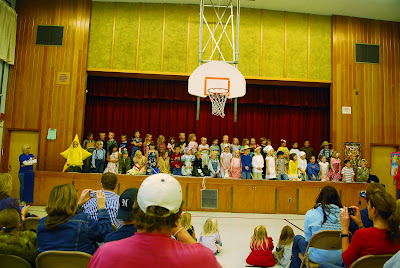 They had to put her on the end because her costume was quite pointy and took up valuable space. There were lots of Jack and Jills, Little Bo Peeps, Old Mother Hubbards, and Little Boy Blues.
After school, we met up with my brother Brian and his family, who were in town for a night. They were heading out and we wanted to say bye, we were hoping they would stay later, I had cancelled plans with friends so that we could hang out with them.
Matt took me out to dinner later. We hadn't been on a date in over 2 months. It's kinda nice to get out without children. I wish we could do it more often.
Posted by arah at 7:40 PM

Arah, how did you make it? We must have a lesson!

wow that is awesome

I love her individuality and your amazing talents to make things like that. She truely is a STAR!!!

Yes, what did you use to make it? Dang cute!

THIS IS AMAZING! You are so the queen of everything crafty and creative!!

Thanks again for the costume. I can't wait to wear it! Happy Halloween!