So before I head off to see Death Cab For Cutie tonight, I thought I would post once more because I might not get to it for a coupld more days.
Here is Brinley's birthday. 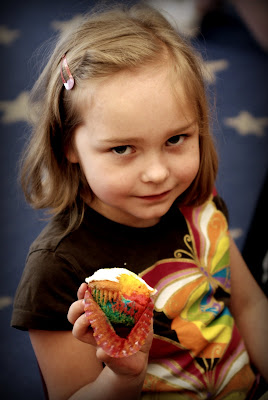 Monday we took AWESOME rainbow cupcakes to school (i didn't even notice that they matched Brinley's shirt. Maybe thats why she picked it out). They were a hit with everyone. Thank you Betsie, for the idea. LOVED IT! However, I don't recommend doing rainbow cupcakes...pain in the behind. 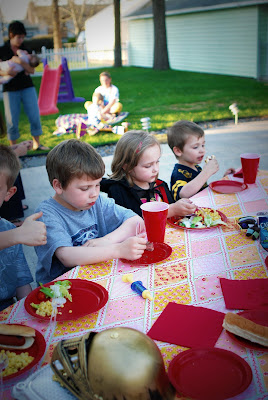 Later, we invited a few friends and family over for a BBQ. Brinley choose steak, potatoes and corn for the menu. It was delicious, even if my plate was stepped on, ran over by a wagon and soda spilled on it, none of which was done by me. 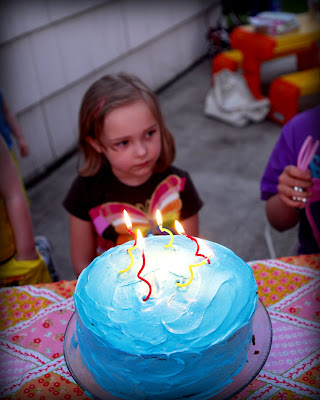 She choose the color of frosting and asked for sparkle candles, which i was not about to drive out to Walmart for. The squiggly ones would just have to do. 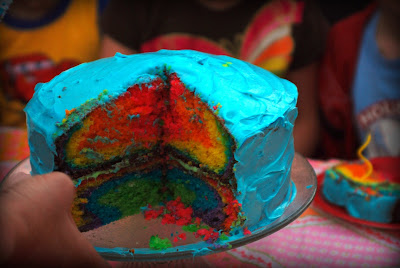 We cut open the cake and surprised everyone with yet another rainbow cake. Way easier than the cupcakes. It was a hit. Brinley was spoiled rotten. WAY SPOILED! She got a Nintendo DSi, including games and a case, Heelies (she is still trying to figure out how to walk in them), an umbrella and sunglasses (which we took to Seattle, but didn't end up needing), Littlest Pet Shop (one of her favorite toys), money (another fav), bubbles and a ladybug garden stake (which keeps moving around in the garden area). It was a fun day for her.
That night she had all of her gifts taken away for three days. I guess maybe you should be thankful for what you get and not complain about things...
Posted by arah at 2:22 PM

She is sooo cute! I love the cake! How did you do that? That is sooo cool!

yum! I love the cake.

I have to say that I'm having an issue with the whole complaining about things with Ethan. I don't know what to do about it. It just seems like they're never satisfied. The more they get the more they want. Anyway, its good to hear that my six year old isn't the only one.

Happy late birthday Brinley! Can you believe they're six??