first quilt of the year.

I LOVE my sewing machine.
I finally got my mom's birthday gift finished...three weeks late. But I did it and I love how it turned out. Especially since I did no measuring, at all.
Its not for a bed, but for cuddling up on the couch reading a book or, in my Mom's case, watching FOX News or CNN. 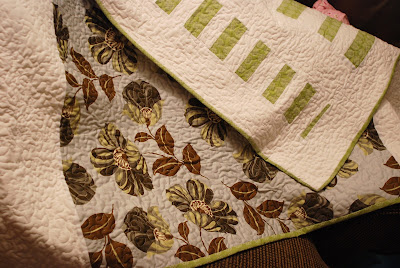 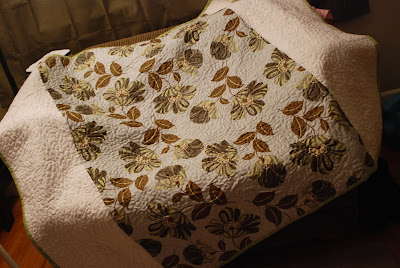 I picked out the fabric just for you. 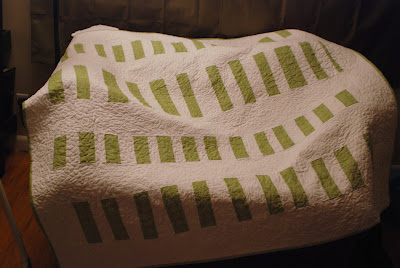 This isn't my first project on my new machine, but I can't post the other one yet.

I have found a love for stippling. I think I'll be doing it on most of my quilts I make. I hope to make one a month, at least.

Sunday, we went out to visit Olivia. It had been the first sunny day we have had in weeks (it only lasted two days). We hadn't been out there in a while because of the snow. (Its kinda hard to haul a 5 year old and a car seat through 3 feet of snow.) When we got out there, they had plowed clear out by where Olivia is buried. They had had a funeral there sometime last week. I will just note that I am greatful for the chimes that hang on a hook just above her. They had plowed the snow right up to her, even moving the rocks we placed out of the way. I think they would have plowed right over her had it not been for the chimes. My baby has a large amount of snow sitting right on top of her grave. If the headstone had been placed, I think they would have destroyed it.

It made me a little frustrated. Matt wasn't as concerned about it as I was. What if we had spent time beautifying her little place and they had ruined it. I feel as if it is sacred ground.

When you grieve the loss of a loved one, emotions come and go at really odd times. It has been over 14 months since Olivia's death. I find that I will start crying and not sure what has set it off. This past Sunday was Stake Conference. The Stake President told a story of a gift that was given to his son's family at Christmas time. The gift was a cookbook from an 8 year old neighbor friend of their son. When they opened it they weren't sure why he had given it to them, until they read the dedication page...

a few months before Christmas, this family experienced a miscarriage. Written on the dedication page was a note from this boy, "To the Pitchers, because they lost a baby and they need a gift." (I hope I got most of the story right)

Both Matt and I were in tears, I don't know if it effected anyone else the way it did us. For an 8 year old neighbor boy to remember what this family was grieving was just sweet.

I hope that people don't forget my daughter or what she meant to us. That another baby doesn't replace the one that was lost. Everyday I look at Sarah, she reminds me of what we would have been doing last year with Olivia. I think about the complaints I made while I was at the end of my pregnancy with Sarah, and regret wanting to be done, because that was all I had with Olivia.

I would write more, but I am headed down to the hospital for photos this afternoon.

Beautiful quilt Arah! I wish I could have just a thimble full of your talent! You always amaze me at what you create!

I am sorry about the snow and the plowing. It is sacred ground. Soon the snow will be gone and the grass will green up, flowers will wake up and Spring will SPRING! I live for the SUNNY days without fog...

Thanks for another post that makes you slap yourself and remember what is important.

The story President Pitcher told touched me too. What a sweet thing for that young boy to do.

Arah, that quilt is amazing. I wish I had your talent. I really stink at sewing. I've tried, but I can't seem to get it right. I can do tie quilts and that's it.

Sorry about Olivia's grave that's not cool, that they made a mess of it. I can wait for all of this ice to melt. It's not very fun for the kids to play in anymore.

I had a miscarriage between Sarah and Kat. It was really hard on me.
I am really grateful I had good friends and family to pull me through.

Your talents are never ending...the quilt is beautiful!
I too am so sorry about Olivia's grave. People can be so careless sometimes. Just know that I will never forget Olivia and what she means to you! I don't think anyone that has been touched by your experience will EVER forget her!
Love you

The quilt is beautiful! Nice job.
People won't forget your sweet Olivia as long as u keep remembering her.
I'm sorry for your loss.

Yes, wasn't that a touching story President Pitcher told? Made me and Ben cry. I thought of Olivia too. I thought of my sweet six year-old's drawing in his card for you--a picture of your family on earth at the cemetery with Olivia up in Heaven.

Children know how to do what adults don't. Adults feel sad and want to do something but aren't sure exactly what. Kids are sad so they give what they have!

Your quilt is amazing! I feel like emotions are difficult to handle sometimes, even without what you have had to go through. You are certainly entitled to be emotional over your lost baby- and no one should ever think that Sarah replaced Olivia- - and I am guessing most don't. Hopefully the snow will melt soon off of her grave.

Hey Sis, I thought I had already commented on my beautiful quilt and thanked you, I'm sooo SORRY! I love my quilt and had no idea that you had even did the stippling, what a talent. It's beautiful. You continue to suprise me and teach me. Now I need you to teach me how to do stippling.

As for our little Olivia's grave. I think we should have a family work day in the Spring and go work on the area around her and close to her grave to beautify that area, and then place something a little more substancel that will be seen if it ever snows like this winter,again. We'll never forget our little grandbaby Olivia, we can't. She may have lived on this earth for only a moment in time, she touched everyone's lives in the family and to think, she is still a part of all of our lives, forever. I'm so grateful. Thank you again. Love mom

I cried during last week's conference talk too, even though I have never lost a baby. It was so sweet of that little boy, and it made me resolve to think more about others and what they are going through. I thought of you guys and how if someone just met you, they would have no idea what you've been through. I think sometimes I forget that we never really know what is going on in someone else's life...most people put on a brave face, and I just take them at that. Anyway, sorry to ramble on, but just know I'm thinking about you!