Well, another 47,000+ bloomies come and gone. This year was especially enjoyable. I wasn't able to run it, but I got to be a spectator. I also became the official 'Erickson family babysitter' for my brother, Brian, and my sister, Julie. Church clothes were forgotten by my nieces and it was easier to just have them throw something on and drag them downtown than deal with 4 kids during church. 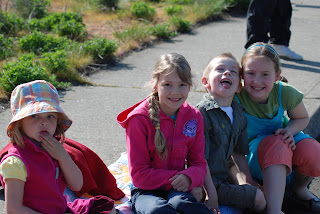 The kids had a great time hanging out by this guy... 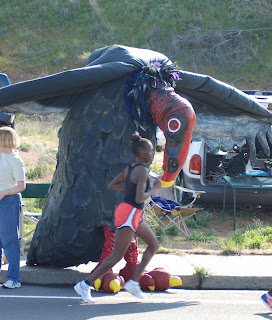 and listening to some great tunes at the 5 mile mark, the top of "Doomsday Hill". The vulture is a Bloomsday tradition. He sits at the top of the hill and as people run by they give him a hug, take a picture with him, or give him a high five. It was originally a Halloween costume. It has a wing span of 16 feet and is over 10 feet tall. Just as we sat down, I looked over to see... 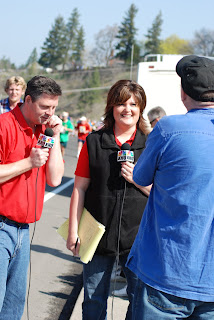 the people from our favorite news channel. We sat right next to them. I am sure you might have caught a glimpse of us in some footage. 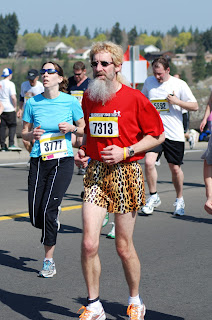 Bloomies are known for dressing up in odd clothes so that they get noticed. Most of the people we saw were Elite runners and finished the race in less than an hour. It is the best people watching! Here are a few of my favorites: 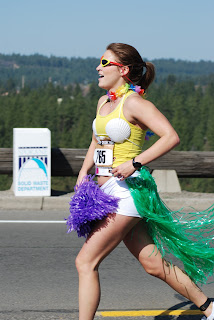 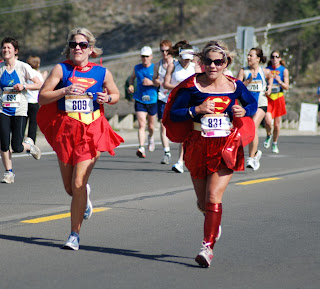 Super Girls! There is a third in the background. 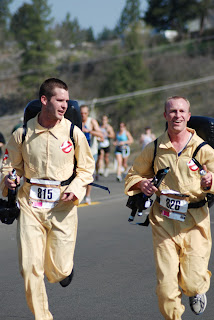 Ghostbusters! These guys sprayed the kids with that foam string stuff. They loved it! 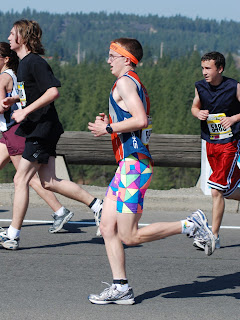 Love the shorts. You know he only pulls these out on special occasions. 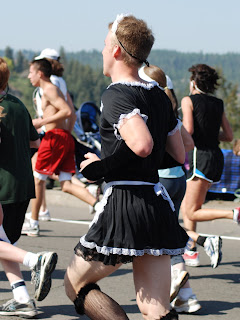 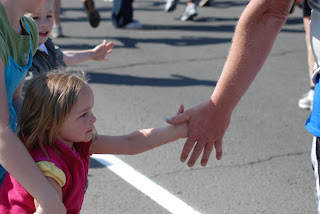 The kids were cheering on the runners, giving them high fives. The runners loved it. 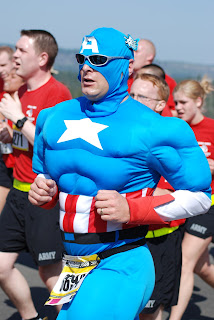 This guy had to be dying inside his costume. I love were he posted his number...nice. 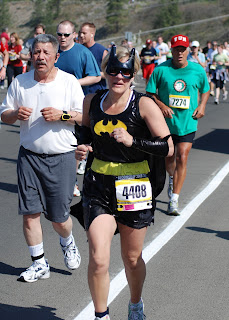 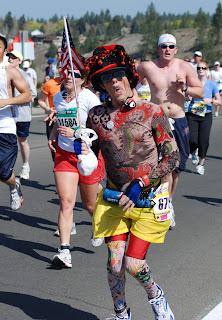 this guy was awesome. I think he has muscular sclerosis or something like that and his time was amazing. Those are not real tattoos, by the way. 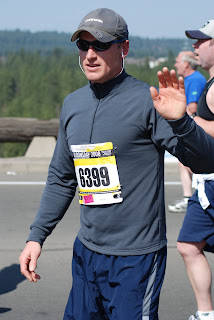 Merv was the first to pass us. Giving Cody a big hug on his way by. 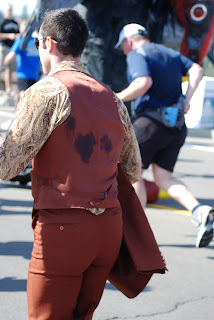 This guy HAD to be hot in that polyester suit with those tight pants. 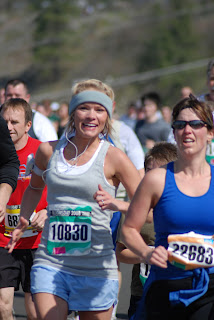 Julie came up next, gave Cody a hug and kept on running, trying to keep her time under an hour. 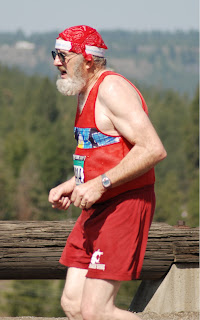 Look, even Santa is trying to keep in shape. 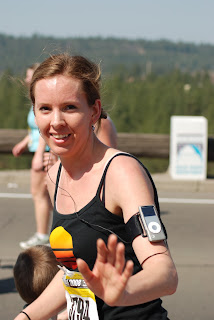 Here comes my SIL, Becca. Hugged her girls and off she went. 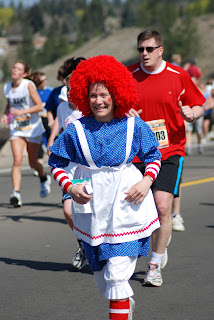 That fro is awesome. 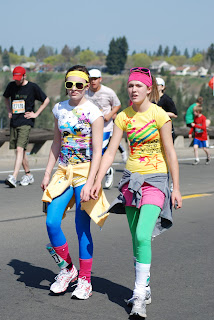 I saw alot of the 80's leotard look. Especially on teenagers. 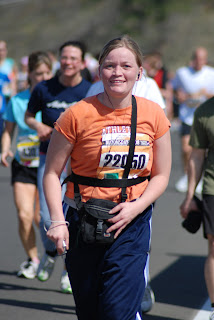 Kami shows up with camera in hand. 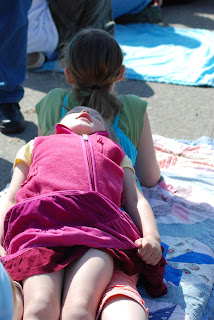 Brinley got a bit bored waiting around and tried to get a tan. 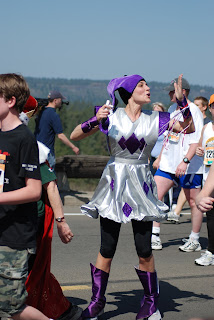 This lady was great she was all over the road, talking to people, taking pictures, just having fun. 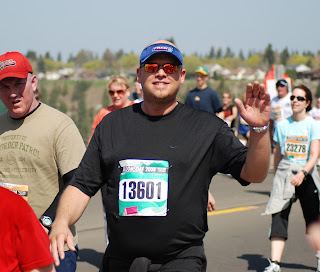 Last of the Ericksons, my brother Brian and... 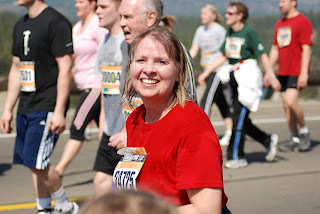 my mom. She gave us all hugs. 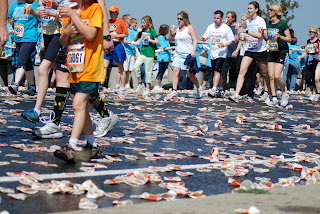 The 5 mile water station was the last on the course. The next one ran out of water, so it was pretty busy here. The picture does not do the water cups justice. They were EVERWHERE! 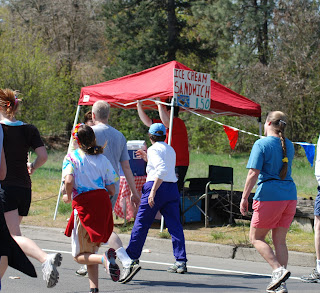 Nothing like buying an ice cream on the course and they sell tons of them. I don't get it! 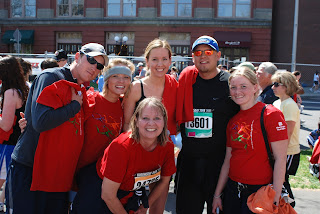 The end of the race. Good job guys! It was a lot of fun.
A few facts about Bloomsday:
Bloomsday started in 1977 with 1,400 people. Today it brings in about 50,000-60,000 participants. The course is 12K long. It is usually won by a Kenyan. There is a Bloomsday run in Iraq for soldiers who would like to participate. In 2005, a couple was married on the course. It is one of the largest races in America. The original entrance fee was $3.oo. Today is you register late is will cost you $30. Want to know more? Check it out.
Posted by arah at 9:43 PM

I totally forgot it was bloomsday weekend. Ha ha...I was even born on bloomsday and it snowed that day.Crazy! You got some great pictures.

thanks for helping us out arah, it was SOOO nice to see you guys at the top of that hill.

Great pictures. Looks like fun was had by all. Kudos to the family who ran.

I love it! Awesome pictures!

How fun!!! I see all these pictures and it makes me sad I didn't sign up to do it this year. I haven't done Bloomsday for 3 years now. Great pictures of all the fun costumes. I can't believe what people will wear for a little attention.

Indeed, seeing you on the crest of that hill did help get me up it, as I was focused on trying to see you instead of how much it sucked.

So many crazy people on the run. I should have people watched last year.

What's with all the people in costumes? Those pictures cracked me up.

Looks like you guys had fun! what a gorgeous day (finally!!) for Bloomsday. i think next year I will get in shape and try it myself (That is, if the weather turns warmer earlier--I am way too old to run outside when there is snow on the ground!)

That looks so fun... We should've never left Spokane!

Great pictures! I forgot about Bloomsday - duh! I was walking in a downpour without an umbrella on Sunday....

Wow, great pictures. It looks like everyone had a great time.

So the picture of the Hula lady? My boss was running right behind her most of the race (he finished 51 mins). He said there were two of them, one usually in front of him and one behind. Looks like you had an fun, fun time!!

I always walked with my dad & I never knew that people dressed up like that LOL! I LOVED your photo essay on it!