Here I am! Finally, the new cord came...yeah! This may be a long post, so...sorry.
This past week has been a long one, with me being sick and no computer. i couldn't even play with my pictures. i would say that being without the computer was worse than being without TV, although, i did enjoy watching Biggest Loser last night...is anyone else obsessed with Biggest Loser? i don't know what it is about it. I guess there are certain contestants that I really, really want to get kicked off and there are some i really, really feel deserve to win. And to watch them lose all that weight, it just amazes me. Anywho, I am HAPPY to have my computer back!
So here is our trip to Seattle. If you haven't ever been to Seattle, it's similar to San Fransisco, with the public market (the place where the fish are thrown) and lots of seagulls, but Seattle has some really cool touristy places, such as the space needle, tons of museums, the troll under the bridge, etc. It's a pretty fun weekend getaway, completely opposite of Spokane.
Driving there from Spokane, there is this antique/fruit stand that we have been wanting to stop at. So we did. I haven't seen antiques that expensive. We found some cool glass bottled soda.
Funny thing is, they weren't antique and there is a place called The Soda Shop, here in Spokane that you can get all the sodas at. 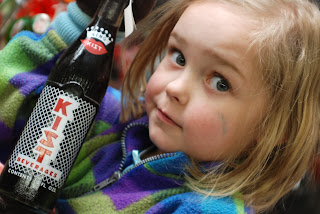 Brinley's showing us her favorite bottle. 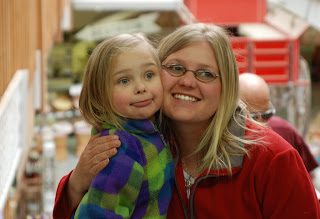 Brinley would not stop making a face. 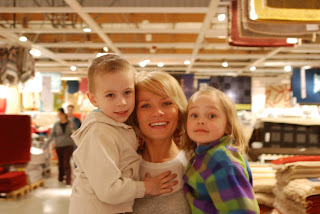 This was my Mom and Julie's first time to IKEA. The kids drove us nuts. We drove straight there from Spokane and the kids were jumping off of everything and running everywhere. i don't blame them, they just sat for 4 hours in a van. 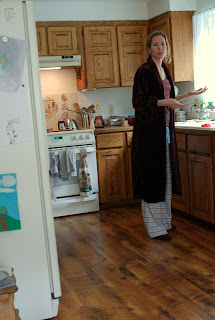 Becca and Brian were nice enough to let us crash at there house. I know Becca will be so happy i posted this picture of her. 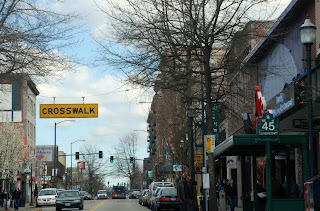 The next morning, Julie had to get some of her ebay stuff done, so it was to the university district we went and I got to sit in the van for 2 hours with Cody and Brinley...thank goodness for the DVD player. This part of town has the best people watching. It is just a few blocks from the U of W. Some interesting things about the u of W: it is pretty much it's own city, it has it's own fire department, police department, and hospital. It has a residence of 80,000 people and it has it's own zip code. The campus is HUGE! It is where I always wanted to end up at if i was going to finish school. so, there is some usless information for you. 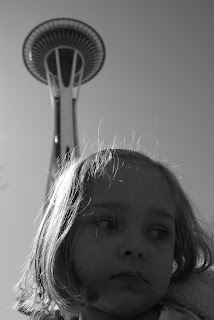 We headed down to Seattle Center after lunch. We decided to take the kids to the Science Center...the coolest place for kids! We had a blast. I would have like to have stayed longer, there was so much stuff to play with. 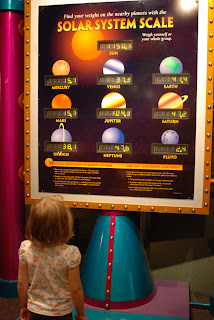 My daughter is obsessed with space. She takes after her dad, who got her interested in it. She LOVES the planets and is always comparing them with how much she loves me. ("Mom, I love you as much as the hot planet"). 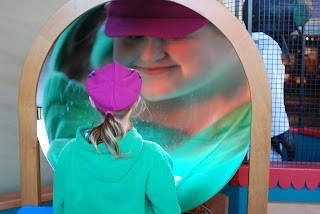 This is how I feel...and 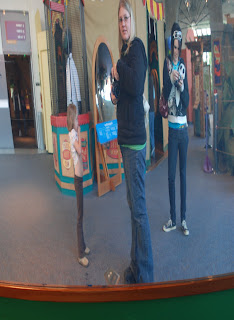 this is what I WISH i looked like, tall, thin, etc. Every mom that came by this mirror took a picture of themselves in it. 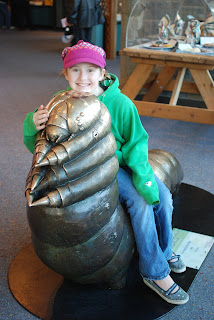 My neice, Isabel, was such a sweetheart that day and a big help with Brinley and Cody. I love this caterpillar and i want it. 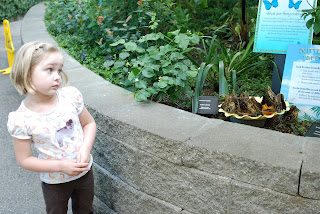 Brinley was so excited to see the Butterfly house, until she got inside of it. She realized that too many butterflies is not fun. One in particular kept following us around and she freaked out...maybe it's because she smelled so good. I told her to stand next to a plate full of butterflies (they were munching of rotten fruit) and she was afraid one might jump out and attack her. It was funny, I laughed. She yelled at me. 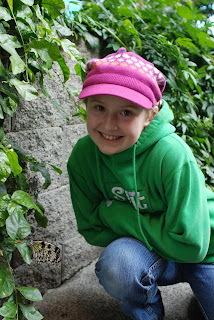 Isabel is not afraid of butterflies. 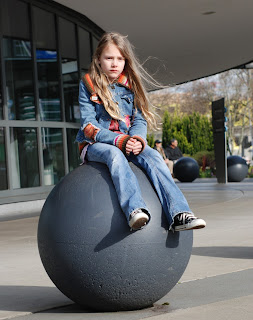 Makaela had a really bad day and would not smile. She was being such a turd. 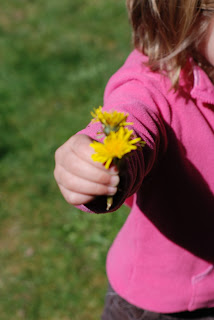 Just before we got ready to head back home, Brinley and Cody picked some beautiful flowers for us to sneeze with and then throw out the window without them knowing. 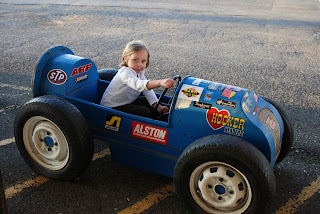 In the middle of nowhere, between Seattle and Spokane, there is this lone gas station. It was our potty break. They have the neatest little motorless go-cart. The muchkins thought they were fun.
If you have ever driven east heading into Spokane, after you have driven FOREVER through the fields, ther is a section of road where the trees start and you just know that you are almost home, except it goes for 30 miles and it's the longest 30 miles you will ever drive, but at the end of this treed highway, you have only gotten as far as cheney and you still have another 15-20 miles of driving. It's the most irritating thing. It just tricks you brain, drives me crazy!
So that's our trip!
Posted by arah at 6:20 PM

thanks for coming with me and being the designated chaueffer/babysitter/get-a-way driver. that picture of isabel on the bug is cute. i must have missed that critter when we were there. can't wait until our trip for memorial weekend. :)

Loved your trip stories. It is so true about that last 30 miles. They are the longest ever. It is so weird. I always hated that. You are cute. Miss you. Love you.

That is such a wonderful picture of Brinley in front of the Space Needle. You have an eye for amazing shots.

I know about that last 30 miles - they seem to take as long as the trip itself - that is until you hit sunset hill. It is always there that I know I am home.

Oh I always get a good chuckle reading your blog. Hey, where can I get one of those mirrors? I'm so sorry you are sick. I totally know what you mean. That stuff is the WORST!!!! So, now I really want to go to IKEA and see what it's all about.

You have some great pictures. I think every woman should have a mirror like that in their house. I know I want one! I'm glad you had such a great time. Don't you just love going on vacation.

I have always thought the worst part of the drive home from Seattle was from Ritzville to Spokane. It drags on and on. Which is odd because going the other way it seems like..boom..Ritzville.

The Science Center is truly a full day event. We have great pictures of that same bug. LOVE it there. Glad you had fun. Wish I could have arranged it to meet up with you.