Christmas was quiet. ahhhh.
Brinley woke at 7am, but since Sarah was still sleeping, we had Brinely hop in bed with us and play on a cell phone till 8am, when Sarah woke up. Santa was good this year and brought us a Wii. It's been fun to watch Brinley beat us at everything!!! She is a particularly good bowler :) 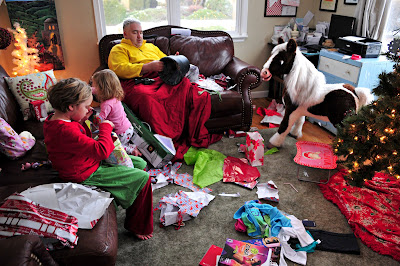 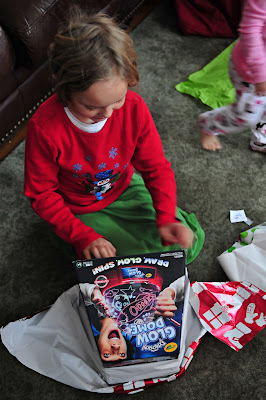 Brinley has asked for a glow dome for months. It's pretty cool and has been a source of entertainment in the afternoon, when it starts to get dark at 4pm. She got new clothes and a few littlest pet shops. Her favorite thing, and takes it everywhere, is a penguin pillow pet from her Aunt Becca. 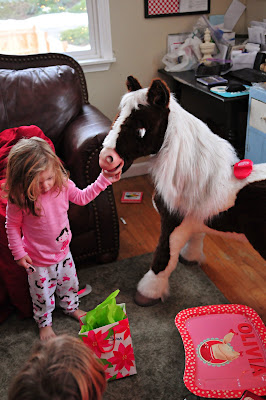 Sarah is obsessed with horses and got one to sit on for Christmas, thanks to Craigslist. She LOVES it. She pets it and sits on it to watch movies. It moves its head and tail and neighs and snorts and eats it's fake carrot. complete awesomeness. She did the funniest dance when she saw it. I wish I had it on video. She got a new Olivia snack tray, an outfit and a few other horse like objects.
I also made the girls a huge 4'x4' felt playhouse. I forgot to get any decent pictures of it and will do that sometime this week. It was fun to make and easier than I thought too. The girls love it and it can be taken down easily.
Matt and I celebrated our 11th Anniversary on the 10th with a weekend in Seattle without children. It was awesome and much needed. He spoiled me. I found that I am not a fancy hotel kind of person though, room service was nice and all, but I am not a fan of having them set it up in your room. I can do that myself :) We had a blast though. Thanks to my sister, Julie, for watching our kidlings.
Posted by arah at 3:34 PM