I have been asked by several people how I made the star costume.
It. Is. So. Easy.
I bought 2 1/2 yards of the stiffer quilt batting from Joann's (with a coupon, of course), you know the kind that comes on a big roll? Thats the stuff.
I folded it in half and had Brinley lay on it at an angle, so her head was kinda in the corner.
Then I measured her, to see how big I needed to make the star.
I have a ginormous roll of butcher paper laying around and made a template with it.
Then I used it to cut the star out of the batting.
I then sewed almost all the way around it, making sure that the bottom was open so that Brinley could slip it over her head.
I turned it inside out and had Brinley try it on, I felt for her face and then had her take it off so I could cut out the hile where her face would go. I then did the same for her arms and cut slits where she could put her arms through.
I bought some cheap spray paint, took it to the garage and sprayed it, then let it set overnight to dry.
The points by her legs, I stuffed with extra batting, so they would stay straight, you might add a little in the points by the arms too. ( I sewed around her head hole so that it wouldn't stretch, its worth it, I wish I would have done the same to the arm holes)
And waalaa...you have a star costume. 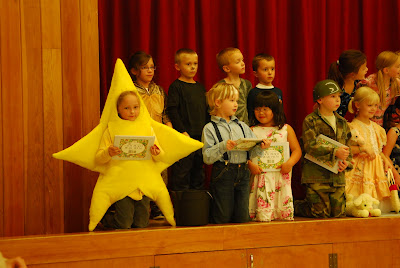 I was going to add some battery operated christmas lights to it....twinkle, twinkle...but Brinley didn't want them. I would have randomly poked the little lights through the costume, hiding the wires.

What a good idea! Thanks for the lesson, totally gonna do this one.

What a cutie. Brinley is the perfect little star.